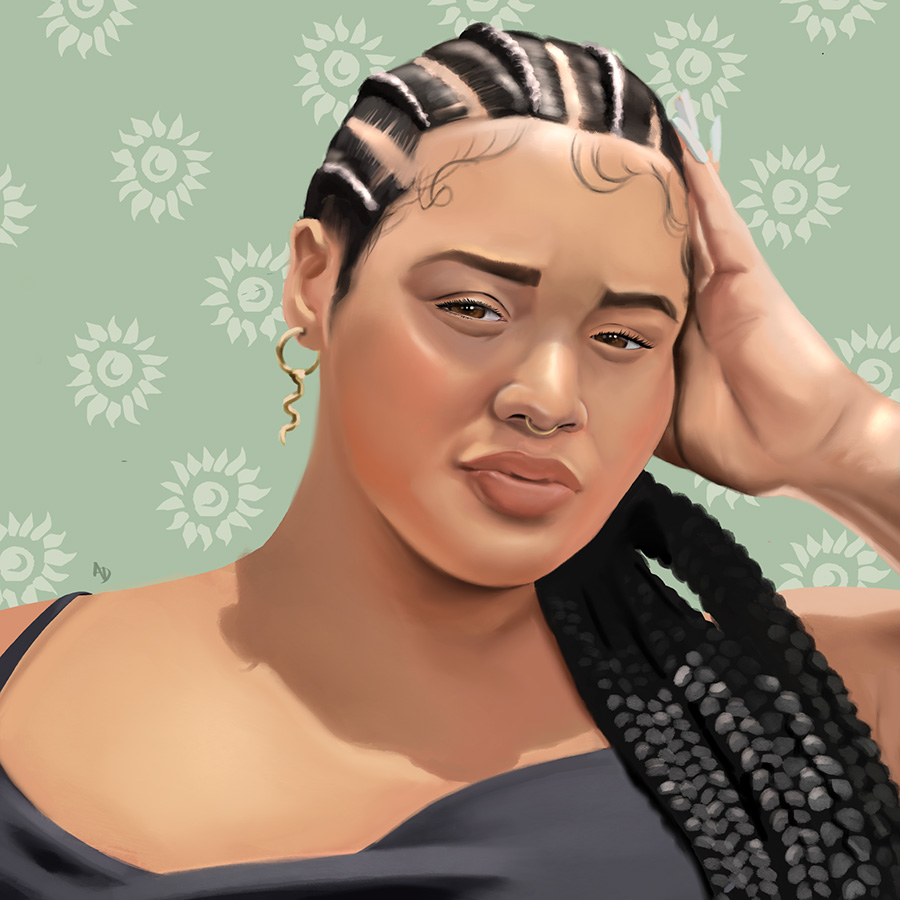 I was raised by my grandparents, two elderly Black people from the South, and I went to Catholic school from kindergarten until I graduated high school. To put it mildly, I was raised in a very conservative environment. We didn’t talk about sexual health in the house or at school while I was growing up, so when I went off to college, I realized I didn’t know anything. While I’d always believed people should have autonomy over their own bodies, I didn’t know anything about my own body, reproductive health, and especially abortion access.

One day during my junior year, I decided to take a pregnancy test because my friend happened to have a pack of 100 that she ordered from Amazon and was done to the last one. I took it as a joke, never once thinking I was actually pregnant. What I didn’t expect was for the pregnancy test to turn positive within 10 seconds. In addition to feeling shocked and fearful, my first thought was, “I don’t know who to call.”

I didn’t feel like I had many close friends nearby, or people I felt comfortable sharing about my situation. I felt isolated. I couldn’t tell my grandparents in fear of being displaced from my home and while I knew people who were young parents,  I didn’t know anyone who’d had an abortion. To make matters worse, any and all narratives I had heard about abortion had been negative.

Initially, I intended on continuing my pregnancy. But I was so sick, and my OBGYN wouldn’t see me because I was too “early” in my pregnancy. My body was deteriorating rapidly; I was feeling trapped, dismissed, and mostly scared, knowing the harm caused to Black women at the hands of a racist medical system that refuses to believe us. I was living with my grandparents and I was lying to them saying I had Mono. I knew there was no way to get to the hospital without them knowing, and it was becoming increasingly difficult to keep my pregnancy and illness a secret. My options were limited. I remember calling Planned Parenthood only thinking, “If I continue this pregnancy, or don’t get care, I am going to die.”

So I had an abortion — I took it at home in the form of medication. The moment it passed, I felt an immense sense of relief. Followed by guilt, because that is what I had been told to believe, abortion is an awful thing that no one wants to happen. While I did go into a deep depression after,  I came to realize I only felt this way, not because I had an abortion, but because of the barriers, I faced, specifically stigma and shame. I did not want to be pregnant, I did not want to have a child, and I did not want to be a parent, so I didn’t. Period.

My truth is, having an abortion was the best thing I’ve ever done for myself, and that’s why I share my story. It’s even more important for me when I think about my Blackness. As a poor Black woman, who spent the majority of my minor years in foster care, I’ve always had my voice silenced, and choices made for me. Having an abortion, and deciding what I want my future to look like, was the first time I felt like I had ever made an autonomous choice. When it comes to reproductive choices, we as Black people in a white supremacist state have never been seen as smart or capable enough to make decisions about our bodies or managing our own lives and families, so they limit our choices and take away access to the care we need and want.

My abortion also opened the door to building community in ways I never dreamed possible. Shortly after I had my abortion, I got connected to the Reproductive Justice space, specifically, We Testify, Women Have Options (OH), and Advocates for Youth. I started learning that many of the people drawn to these spaces have had abortions themselves, and I loved that because I was still dealing with a lot of internalized stigma from my abortion. I was stuck feeling like I was the worse person, and that it was wrong for me to find joy because I had an abortion. It felt awful and like I had to portray a false narrative about the decision I made. It wasn’t until I started meeting all of these other people who’d had abortions, and seeing how incredible they were, that I started to ask myself, “why do I feel so poorly about myself for having an abortion when I feel like they are the most amazing people for having an abortion(s)?”

I want people reading to know that it’s possible for people who have historically been silenced to share their experiences and be supported and celebrated while doing so. For those of us who’ve been pushed to the side about issues that impact us the most, issues we are most disenfranchised by, I believe we must utilize the platforms and resources available to us to uplift what we’re going through and the barriers we face when accessing care.